Words That Wake You Up

By 10:30am Sunday morning, around page 60 of F. Scott Fitzgerald's The Great Gatsby, I'd had three cups of coffee, one shower, and 16 highlighted passages. 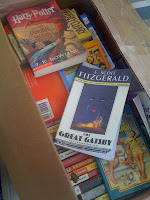 Grandpa has a habit of buying used books in bulk from eBay, and depositing them to our doorstep about once every six months. After such an event I have a tendency to get flustered. After all, where do I deposit the goods? Rifling through the books with a surrendered sigh, expecting volumes for the early years, I lasered in on a set of steamy eyes. The Great Gatsby.

One the airplane back from Italy, I finished a book described as a modern Great Gatsby: Netherland, by Joseph O'Neill. I enjoyed the book, and completed it before touchdown in San Francisco. So why not read the real thing? I'd read it before, but who remembers drone details delivered from the English teachers of yesteryear?

Comfortably I nestled into the pages, fuzzy socks underfoot. Here is what I found:
These passages are highlighted, which confused my daughter.

"Mom, you are not supposed to mark up books!".

"I've spent 40 years respecting boundaries (this will be one of the many "40 year" comments my kids will start to receive between now and November), thinking that I cannot disrespect the written word just because it is in a printed book. But let's think about the author - I wonder if he, looking down on us now, wouldn't take it as a compliment that I'm paying this much attention to his hard work?"

"OK, fine Mom. But I'm not going to mark up my Harry Potters."

"No problem, kiddo. That's your call. This is mine."
Posted by Lorraine Akemann at 11:11 AM

Email ThisBlogThis!Share to TwitterShare to FacebookShare to Pinterest
Labels: Books

it remembers a story : When I was 10 I put my signature on a dictionnary and my parents told me that I was not supposed to do so, and I just answered that it was to prevent the dictionary to be stolen ;-)
Anyway, your remark about "boundaries" is very interesting. It is very delicate to cross a boundary but sometimes it is important to do so. Even as adult it is delicate to do it, so it should be very complex for a kid to decide if he can do it or not.
By the way, I started mark up books some years ago but I still feel a little bit guilty when I'm doing it !